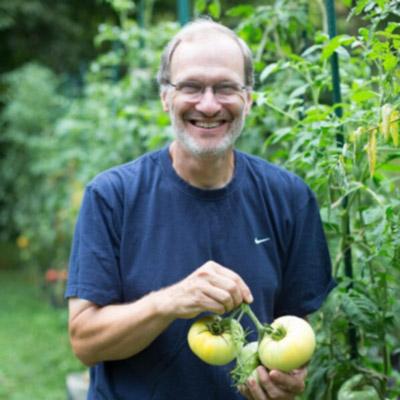 Craig LeHoullier, a native Rhode Islander, lives and gardens in Hendersonville, North Carolina with his wife, Susan, and small collection of cats and dogs. A chemist by education (PhD, Dartmouth College), he held a variety of positions in Pharmaceutical companies until finally retiring in 2011, allowing his parallel gardening obsession to more fully flourish. His love of gardening began very young, originating from walks through his grandfather’s garden and back yard efforts with his father. Craig’s focus on heirloom and other open pollinated varieties of tomatoes began when he joined the Seed Savers Exchange in 1986. Starting with family heirlooms, moving on to the search for and procurement of many old commercially developed varieties and now developing new, useful tomatoes for home gardeners, his collection numbers well over 5,000 types. Craig may be best known for being the lucky person to receive an unnamed purple tomato in 1990 that he named Cherokee Purple, now one of the better known and widely grown heirloom varieties, for which he is so grateful. Craig was approached by Storey Publishing to write his first book in 2012, culminating in the release of Epic Tomatoes in 2015; Growing Vegetables in Straw Bales followed a year later. The Dwarf Tomato Breeding Project, conceived with his Australian friend Patrina Nuske-Small in 2005, has delivered, to date, over 145 new open pollinated dwarf tomatoes to the public. Craig sees more gardening, more breeding, and more books on the horizon, as there is always more to discover, learn, create and share. (Photo: Kip Dawkins). You can find his books here: www.craiglehoullier.com