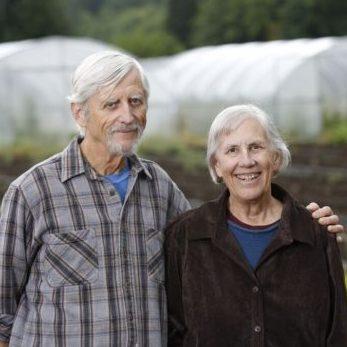 Anne Berblinger and her husband Rene’ began farming in the Gales Creek Valley in western Washington County, Oregon in 1999. Gales Meadow Farm currently employs up to seven full-time and part-time employees and produces more than 300 varieties of vegetables and herbs. They market directly to consumers through the Hollywood Farmers Market in Northeast Portland, the Cannon Beach Farmers Market, and the Hillsdale Farmers Market; and through sales to several fine chefs. Early in the season, they sell starts of almost 100 varieties of vegetables and herbs to home gardeners and other farmers. Anne started saving seeds in their second year of farming, when she discovered that some of the favorite varieties they had been growing for years in their home garden were no longer available. She began breeding when she was given a wonderful bean, now called Frye’s Golden Goose, by her neighbor Torchy Oberg. The first year it was planted at Gales Meadow Farm, it displayed evidence of lots of crosses, so she cleaned it up over the course of several seasons. She is always alert to rogues and replants and develops the delicious ones. Until she retired in the spring of 2007, Anne Berblinger had been the Oregon representative (EDR) for the U.S. Economic Development Administration since July of 1983. She also served seven counties in Northern California starting in 1996. In that position, she organized seven multi-county Economic Development Districts (EDDS) serving nineteen rural counties and the Portland-Vancouver Metropolitan region, as well as maintaining and strengthening five previously organized EDDs. She also assisted more than ten Tribal governments and Tribal Associations to become EDA Partnership Planning grantees and to prepare Comprehensive Economic Development Strategies (CEDS). She continues to serve on the Oregon State University Sea Grant Advisory Council, the Board of Portland State University’s Institute for Portland Metropolitan Studies, and the Advisory Board for the Oregon State University.