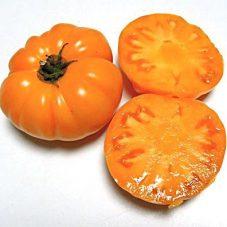 This is a story about an idea that grew into a fun project. One day I was casually reading posts in a Tomato Forum on Gardenweb and noted that Craig LeHoullier lamented the fact that the dwarf category in tomatoes was very restricted. He suggested it would be good to cross dwarfs with heirlooms to remedy this situation! He mentioned New Big Dwarf being listed in a 1915 Isbell Seed Catalogue which noted how the variety was developed by crossing Dwarf Champion (known since the late 1800s) with the largest known tomato at that time, Ponderosa. I thought this sounded like a fun thing to do and decided to have a go at crossing some dwarfs with heirlooms in my next summer season down in Australia.

By the end of 2005 I had successfully made 8 crosses and Craig and I decided to use this material to start a project where anyone who wanted to help grow the many generations could volunteer to take part for as few or as many seasons as they wished. Craig would head up a team in the Northern Hemisphere and I would do likewise in the Southern Hemisphere. We wanted to give volunteers the opportunity to name any new novel dwarf tomato type they discovered in appreciation for helping in the project.

So from this point, the project was on its way. We had just joined a new tomato forum – Tomatoville – and were given a dedicated section there for the project by the site owner who has provided a home for the project now for over a decade! Forum members signed up each season to help grow the many generations of each ‘family’ which is how we identified each cross using names taken from ‘Snow White and the Seven Dwarfs’ and inventing new names as needed. This was a much simpler way to identify individual plants (eg Sneezy F2 rather than Golden Dwarf Champion X Green Giant F2) which can become rather complex, especially when an early generation is used for further crosses and additional parents need to be recorded.

Each year further crosses introduced new ‘families’ to the project with ever more inventive family names. And the number of volunteers needed to grow out the many generations increased until we totaled over 300 people volunteering in a 10 year period! Volunteers who personally named newly discovered varieties have their names in the OSSI listings for individual varieties bred by the project. A complete list of project volunteers is included here on the OSSI website.

The first completed dwarf varieties (fully stabilised) were released to seed companies in 2010 and newly completed varieties have been released year by year since then, reaching 68 at the time of writing (2017). In 2015 we came across the OSSI website and the rest, as they say, is history! So here we are, and the Dwarf Project continues with many more fun crosses being added by Craig since then.

Craig and I are delighted that all volunteers and other people who have made crosses for the project have supported our desire to have all varieties bred by the Dwarf Tomato Project designated as OSSI varieties and are proud to have them listed here. Stay tuned – there will be more to come!

Members of the Dwarf Tomato Project: