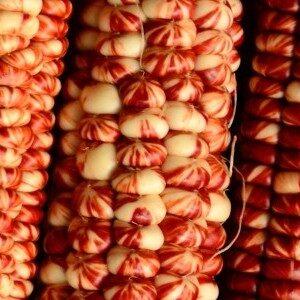 ‘Parching Starburst Manna’ flour corn. 85 days. 5’ tall. Bred for organic systems. A selection from off-type ears earlier in the breeding of ‘Magic Manna’ flour corn. ‘Parching Starburst Manna’ ears have a distinctive blaze/starburst pattern on most kernels. But there are jumping genes involved, so the pattern can be unruly. About half the ears in the variety have the starburst pattern; the rest have the colors typical of ‘Magic Manna’. The flavor of starburst ears as parched corn is totally unlike that of ‘Parching Red Manna’, so provides a second flavor of parching corn. Sister variety to ‘Magic Manna’ and the other Manna varieties. (Can be grown in the same field with no isolation.) Has a white endosperm, clear aleurone, and is variable for pericarp color. For info on how to parch parching corn see The Resilient Gardener: Food Production and Self-Reliance in Uncertain Times. I love parched corn and a chunk of cheese for breakfast, or as travel food. Parched corn holds for more than two months at room temperature without going rancid. Seed saving info: Same as for ‘Magic Manna’ except select for starburst pattern in a red color and select against other colors, except leave some white in the variety. But eliminate brown or starburst pattern in brown color, as this doesn’t taste good parched. Makes great gravy or cornbread though.) See listing on ‘Magic Manna’ for other uses. Bred by Carol Deppe.