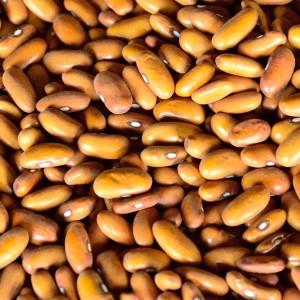 Sister* to Beefy Resilient Grex and to the other two beef-bush lines. Early dry bush bean. Very productive. I was just minding my own business not trying to be a bean breeder at all when my heirloom ‘Gaucho’ beans, supposedly P. vulgaris, crossed so cheerfully with ‘Black Mitla’ tepary, supposedly P. acutifolius, to give me material that I in due course released as ‘Beefy Resilient Grex’. I was still not trying to be a bean breeder when I subsequently got several dozen unsolicited back crosses of those crosses onto pure ‘Gaucho’. The back crossed plants were obvious by their generally short-viney bush type, purplish plants, and usually black or brown seed. One of these back crossed plants produced 806 seeds, the most I have ever got from any legume. Really, what could I do? I saved the seed separately, of course. This plant, named “Resilient 800X’ became the foundation plant for the Beef-Bush series, derived by selecting for bush type and pure colors. ‘Beef-Bush Gold Resilient’ is the first of these to be released. It looks just like ‘Gaucho’, but is a sister line to ‘Beefy Resilient Grex’ and not to ‘Gaucho’. ‘Beef-Bush Gold Resilient’ is a full flavored dry bean. It’s genetically ¾ Gaucho and ¼ ‘Black Mitla’ “tepary”.