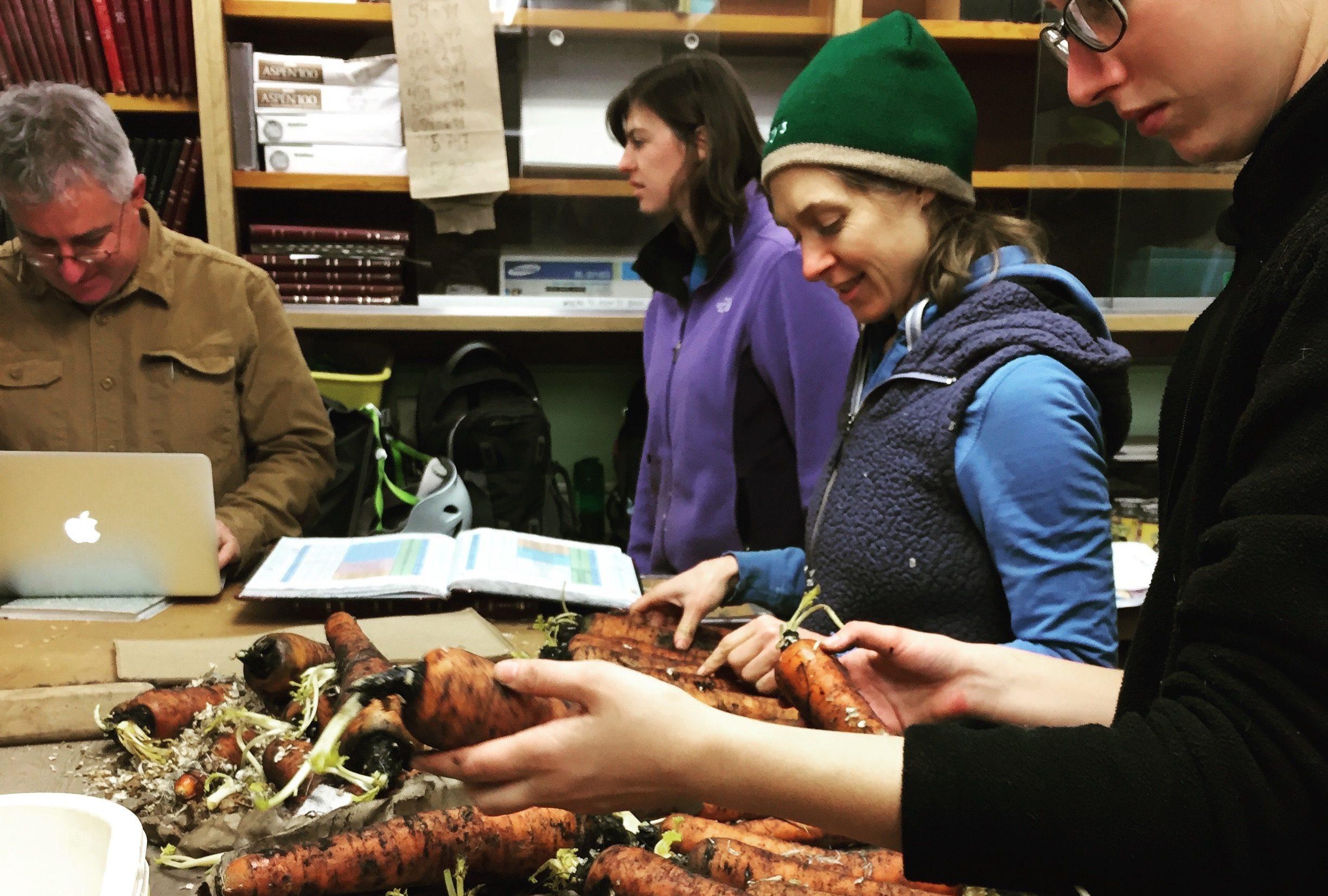 Frank Morton’s ‘Freedom Mix’ lettuce population. Frank identified his 40 most disease-resistant lettuces in the so-called ‘Hell’s Half-Acre’ lettuce trial at Gathering Together Farm. He then crossed these varieties with his best-tasting varieties to create this genepool. The name ‘Freedom Mix’, emphasizes Frank’s intention that the population be open source — to be used either as breeding material by others or to be grown for its unique diversity. Photo: Karen Morton / Wild Garden Seed

The breeders and communities who develop OSSI-Pledged varieties used plant germplasm that was already in the public domain and/or was at least not legally restricted for use in breeding. Through their breeding work, they have developed unique and novel material. They are choosing to share the results of their labor under the OSSI Pledge, which they pass along when they distribute seed: “You have the freedom to use these OSSI-Pledged seeds in any way you choose. In return, you pledge not to restrict others’ use of these seeds or their derivatives by patents or other means, and to include this pledge with any transfer of these seeds or their derivatives.” Thus, the only restriction on OSSI-Pledged varieties is that there be no further restrictions on that seed or any of its derivatives. We say ‘seed’, when referring to OSSI-Pledged varieties, although the species represented within OSSI can be either sexually reproduced through seeds or asexually reproduced, such as by tubers.

The Pledge is intended to ensure the four essential seed freedoms:

Different types of intellectual property rights interfere with the four freedoms. For example, a patent restricts all four freedoms. A plant variety protection certificate (PVP) inhibits freedoms 1 and 2, but allows for freedoms 3 and 4. Licenses and bag-tag agreements vary, but can prevent up to all four of the freedoms.

Each application for OSSI-Pledging goes through a vetting process by our variety review committee, where they discuss with the breeder(s) the process used to create the variety. Usually this involves describing the traits of the variety or population, what parent material was used, and how the variety was bred. The variety review committee also establishes that the person or people pledging the variety were the ones who created it and that they have the right to designate it as OSSI-Pledged. Usually, varieties may be Pledged only by their breeders. However, where the breeder works for a seed company or university, Pledging a variety usually also requires the sanction of the seed company or university.

OSSI-Pledged seed is considered to be “freed seed.” That is, its use for any purpose cannot be restricted. It is important to understand that we use the word “freed,” not “free,” because we refer to freedom and not price. OSSI-Pledged seeds are freed from the patents and licenses that can restrict use. The OSSI Pledge is a commitment to foster unfettered exchange of germplasm and the freedom to use the material for any purpose, with the single proviso that by accepting the Pledge the user commits to allowing others freedom to use the material or derivatives of the material, and perpetuates that status by always accompanying the seed with the Pledge. ‘Mocrocks’ Oca (Oxalis tuberosa), bred by Bill Whitson of Cultivariable. Oca is an Andean tuber crop that can be prepared similarly to potatoes or other root vegetable crops. Oca can be eaten raw or cooked. Oca varieties, like potatoes, are generally maintained and grown from tubers. More information here. Photo: Cultivariable

The majority of OSSI-Pledged varieties were bred specifically under organic production systems (certified and uncertified land but using organic practices). There are not a lot of commercially available varieties that were bred specifically with organic growers in mind, and many OSSI plant breeders were inspired to begin breeding by recognizing the dearth of organically adapted varieties. More than 90% of the OSSI-Pledged varieties were bred specifically in and for organic systems. There is a search category on the OSSI website’s seed page that allows you to review these varieties. Breeding in organic production systems represents a different approach from breeding for conventional systems, and then just trailing varieties that succeeded first in conventional systems on organic land after the breeding is finished. The latter approach will produce only varieties that do reasonably well in both conventional and organic systems, with the largest emphasis still on the conventional (since it is the first step). But what if some or all of the best organic-adapted varieties don’t work as well in conventional systems? A big aggressive root system may be optimal for organics but counterproductive in crowded plantings with high doses of soluble fertilizers, for example.

Secondly, OSSI currently lists only open pollinated varieties. It is possible to Pledge an F1 hybrid (see FAQ), and we will likely see this happen in the near future. We expect that a hybrid would primarily be useful as a parent in a breeding program, and several OSSI-Pledged varieties were selected from a hybrid parent that was not restricted for use in breeding. However, most of the breeders who have been pledging varieties with OSSI thus far have been focusing their efforts on developing high quality open pollinated varieties.

The third trend is that many breeders working on crops that have not received breeding attention from the large commercial programs, are releasing their varieties through OSSI. This includes crops like oca, quinoa, amaranth, chicory, epazote, mashua, orach, and yacon. Since our diets consist primarily of just a few crops, breeding work on minor and orphan crops is important for diversifying both our diets and our agricultural systems. By joining the OSSI community and by buying and using OSSI-Pledged varieties, you support the work of creating a decentralized, biologically diverse, independent food system, from seed to table.

Claire Luby is half-time Executive Director of OSSI and half-time postdoctoral researcher at the University of Wisconsin-Madison in plant breeding and plant genetics. Claire’s research examines the impact of intellectual property rights on freedom to operate for plant breeding.In addition, in collaboration with Irwin Goldman, Claire developed eight intellectual-property-free populations of carrot germplasm based upon market and color classes and released them as OSSI-Pledged varieties, thus providing ideal sources of material that all interested can use to breed new open source carrot varieties.  Claire is also a co-founder of the Student Organic Seed Symposium (Photo: Matthew Dillon)