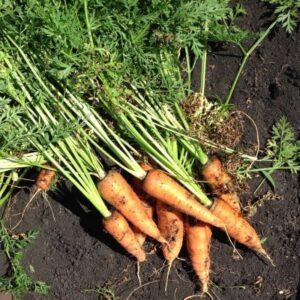 Bred for Organic Systems: No

Oranje carrot is an open pollinated Danvers type for processing, derived from crosses between selections made out of Gold King and Danvers. Gold King and Danvers are open pollinated varieties that have been in common use in processing carrot production for many decades. Different versions of Gold King and Danvers were grown in the mid 1990s on several Wisconsin carrot farms, and selections were performed by farmers for superior root types over a period of two years, and five selections were identified for seed production. Seed was produced on these selections by Larry Baker of the Asgrow Seed Company in DeForest, Wisconsin, and shared with Irwin Goldman’s carrot breeding program in Wisconsin as well as with the farmers who originally grew the varieties. Pedigree selection following crosses among the selections was practiced for ten years in the Wisconsin carrot breeding program. Oranje has characteristics of both Danvers and Chantenay but is more typical of a Danvers type. It has tapered roots, wide shoulders, and is slightly longer than Sovereign. Tops are short and brighter green than Sovereign. Eating quality is similar to other dicing and processing carrot varieties, and Oranje is most suited to canning and processing. Oranje is bolt-resistant and can be planted early in the spring in Midwestern US conditions. Oranje was released through the Open Source Seed Initiative in 2014.