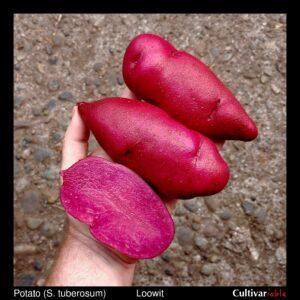 “Loowit is the result of a breeding project in collaboration with Tom Wagner, produced by crossing Tom’s variety Mt. St. Helens and a Bolivian diploid potato. This is a good all-purpose potato with intense red flesh. In cool climates, the flesh should look just like the pictures. In hotter climates, the color may be more pink or pink with light yellow patches. This is not a problem particular to this variety, but is true of all potatoes with red or blue flesh; anthocyanin content is affected by temperature. Red flesh in potatoes is produced by the compound pelargonidin, an anthocyanin that has antioxidant properties and is found in many red fruits, such as raspberries, strawberries, and pomegranates. Loowit is most suitable for baking and roasting. It can also be boiled, but like a lot of all-purpose types, you must avoid extended boiling or it will fall apart. It holds its color very well when baked or roasted, but washes out a bit when boiled. Still, it makes some really incredible looking mashed potatoes. Like many potatoes with dark blue or red flesh, it has a fairly intense flavor, with a hint of bitterness. Most people do not detect this as bitterness, but just describe it as “potato” flavor, but people who are very sensitive to bitter flavors might not like it. I think it has great flavor, but I tend to favor varieties that have some bitterness. This is a late season potato and will do best where it can grow for five months or more and not less than four months. Tubers are mostly in the three to six inch range at maturity. Dormancy is about three months, a bit less than most commercial potatoes, probably owing to its diploid parent. With low temperature storage, you can easily keep seed tubers alive (although sprouting) out to five months. This variety has performed well here against early and late blight. It is fairly vulnerable to scab, so if you have ground that is scabby, it is probably not the best choice. Loowit is self fertile and sets a moderate crop of berries under our conditions. We supply enough material for five plants. Typically five small tubers, but in some cases you may receive a smaller number of larger tubers that can be cut into multiple seed pieces. Germplasm supplied by the USDA Potato Introduction Station was used in breeding this variety.”