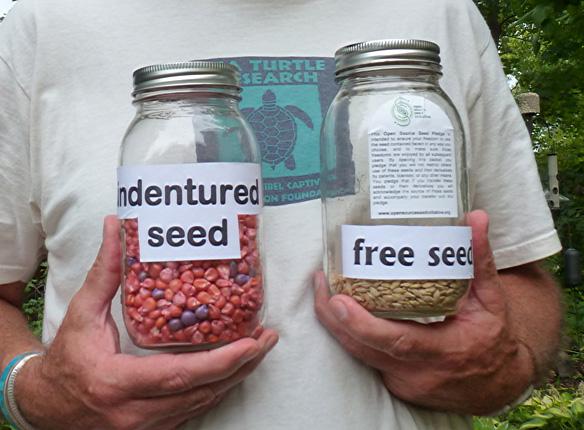 In business we call them “goods”—anything we grow, produce, pack or re-pack for sale. It is a curious term, because the GNP has no screens. It counts everything that generates business activity, whether the product or its result is good or not. As economists have defined it, it is utterly amoral.

As part of her contribution to the GNP, my mother smoked two packs of Raleighs a day for more than 40 years. At age 38 she had a radical mastectomy. At 62 she was dead of lung cancer. Her cigarettes, consequent operation, treatments and premature death expenses all counted as “goods” on many businesses’ income statements. Even though they were really “bads.”

What, you are probably wondering, has this to do with seeds or OSSI? Just this. When I founded Fedco Seeds co-operative in 1978, I began with the principle of inclusivity. Unlike the Fedco co-operative food warehouse, which in some ways was my model, we would sell to anyone, whether co-operatives or not, whether non-profit or not, whether individuals, businesses or whatever. We would sell whatever seeds in our selection any customers who could meet our $25 order minimum wanted. We would offer so-called organic seeds long before there was an NOP. We would also sell conventionally-grown seed. There were no screens except demand.

Over the years we began to take on screens that limited our selection. Longtime Maine Organic Farmers and Gardeners (MOFGA) activist Paul Volckhausen, who served a stint as acting Executive Director in the late eighties and still supervises the massive car-parking logistics at Common Ground Fair in Unity, Maine (60,000 attendees!) every September, catalyzed the first. He did not want his children having to handle fungicide-treated seed when they helped him break down his large co-op order or plant his seeds. We found his logic compelling and stopped selling treated seeds. In 1994 Calgene introduced the first transgenic vegetable, Flav’r Sav’r tomato. Two years later, as the debate raged around the safety and advisability of bringing genetically engineered foods to market, we decided to adopt the precautionary principle and not knowingly sell any transgenic products until further research could reassure us. To date it has not. Fast-forward another nine years to 2005 when Monsanto bought out Seminis, at that time our largest supplier with more than 70 varieties in our catalog. Nevertheless, because of Monsanto’s dominant position in the market, its unsavory tactics, and the ways transgenics were negatively impacting the seed industry, we could not in good conscience sell their varieties. So we boycotted them and set ourselves the arduous task of finding replacements, work still ongoing to this day. Finally, last year we decided that we were unwilling to offer utility-patented varieties, even though these now constitute the majority of new lettuce selections and one third of all lettuce varieties offered by one of our major competitors. Why exclude utility-patented varieties? Because these patents are so broad that they extend to traits and uses of the products, thereby stultifying future research possibilities and freezing breeding progress into the hands of a few patent-holders. I loved utility-patented ‘Skyphos’ lettuce but even such an extraordinary cultivar is not worth trading for a patent restriction that covers its mix of colors that could otherwise be extended and made widely available in other lettuce cultivars were breeders free to use it.

Each of these exclusions has something in common. In each we decided that continuing to carry these products would unleash potential “bads” that outstripped their potential “goods.” None was as clear cut as my mother’s cigarettes, but each posed issues that compelled us to make moral choices. We did not make these decisions lightly as each curtailed our inclusivity, eliminating potential offerings from our repertoire.

What I like most about OSSI is that instead of being a negative screen, it is a positive screen. OSSI excludes nothing except further restrictions on free circulation of seed varieties designated by the OSSI Pledge. Instead of informing what varieties we will not offer, it conveys our pride in advancing varieties that never will be restricted from further sale or further improvements by so-called intellectual property rights. Anything bred using an OSSI-Pledged variety as a parent also carries OSSI-Pledged status. This viral feature of the OSSI pledge ensures that these varieties will never be encumbered by IP rights, and neither will any of their progeny. While patents have continued to narrow the seed commons in the past generation, OSSI could effect a reversal of that trend. By ever enlarging the store of germplasm we have to work with, it could provide a huge boon to the independent plant breeders and farmer-breeders who are becoming essential to the alternative seed movement. At the same time, it permits them to contract with those alternative companies to be rewarded for their creative efforts. It suits so well our desire for including rather than excluding.

I am especially excited about a concept we have begun discussing within the OSSI Board that we are calling Seed Savers Rights. A form of public transparency in some ways analogous to the Safe Seed Pledge not to knowingly offer GMOs, a Seed Savers Rights Pledge would ask seed companies to agree to divulge any information in their web and catalog variety descriptions that they know about utility and trait patents, PVPs, and other contractual or bag tag agreements or other intellectual property restrictions governing that seed. As these restrictions move out of the realm of farm seed into vegetables such as lettuce, I believe the public has a right to know about them, if only to make knowledgeable purchasing decisions (are you buying that seed or are you really only renting a one-time use?), and in the worst case scenario, protect themselves from potential harassment. While Monsanto made an infamous name for itself enforcing such bag tag agreements, negotiating consent agreements and taking farmers to court, we have not yet arrived at such a lettuce dystopia. Let’s hope we never do! SSR has the potential to empower us as seed purchasers as well as to shine a light on increasingly onerous intellectual property restrictions. Knowledge puts the choice in our hands as consumers.

Given the bounty of nature and the proprietary nature of Homo sapiens, it is challenging to consider what forms of relationships create lasting benefits and what ones restrict our possibilities for shared abundance. Seeds, so generously bestowed by the natural world in astounding multiples, would seem to be a natural commons to be shared among all. Over countless generations across thousands of years, human farmers have co-evolved with plants for mutual benefit. Each generation stands upon the shoulders of past generations, improving our crops. How dare one generation or one corporation ignore that debt and blithely patent minor incremental improvements as their “intellectual property?” Deriving from nature itself, they are, in fact, all our common property. OSSI stands as a barrier to that arrogant usurpation, and that is why I support OSSI.

Yes, give credit where credit is due and amply reward those advancements. But put them in their proper developmental perspective and do not reward them by stifling or even slowing any further progress. After 35 years we have seen enough to know Reaganism for the folly that it is. We have privatized our common wealth in the hands of the few at the expense of the common good. Time to heed again the words of legendary plant breeder Elwyn Meader. When asked why he did not sell his varieties for his own personal profit, he said that he had conducted his research through his land grant university with taxpayer dollars and that his discoveries belonged to the taxpayers.

OSSI stands as a beacon to light the way back to that common good until such time society is again ready to recognize our seed heritage as a public good rather than anyone’s private property. Paul Lawn, known to all as “CR”, founded Fedco Seeds, a hybrid consumer/worker farm and garden products cooperative, in 1978 and has been one of its managing coordinators since. He is responsible for much of the distinctive writing and vivid variety descriptions in the Fedco Seed catalogs. CR holds a JD from Yale Law School. His contributions include past membership on the board of MOFGA and as Chair of the Common Ground Fair Steering Committee. He was a contributing editor of Organic Seed Production and Saving by Bryan Connolly (Chelsea Green, 2011) and of The Heritage Grain Grower by Eli Rogosa (Chelsea Green, 2016), and has written and spoken extensively on topics of economics and issues around seeds, farming and genetic engineering. He currently serves on the Board of Directors of the Open Source Seed Initiative. See CR’s writing and speeches at http://www.fedcoseeds.com/seeds/CRindex.htm, and the Fedco Seed catalog at http://www.fedcoseeds.com/seeds/. Photo: Jo Josephson