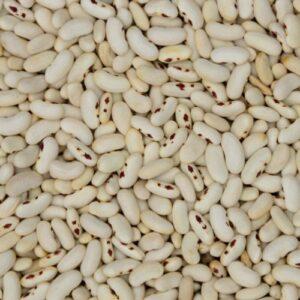 85 days. Sister** to Golden Gaucho. Bred for organic systems. This bean is the same size and shape as Golden Gaucho, but is white with a candle-shaped mark on the hilem. It arose as one plant in a Golden Gaucho planting. As for most white beans, the flavor is mild, and best for adding nutrition and succulence to poultry or vegetable soups or other dishes where a stronger-flavored bean would overwhelm. Like Golden Gaucho, the plant type is a very determinate bush that goes from completely green (and impervious to rain) to completely dry in about ten days, fast even for a bush bean. Last year our White Candle Gaucho planting gave us more than 20 lbs./100 row feet, the highest yield I have ever had in a bush dry bean. You can plant Golden and White Candle Gaucho at different ends of the row, eat the beans where the plantings come together in the middle, and save seed from the ends. Occasional crosses don’t matter between sister varieties. Developing sister varieties is my approach to building ease of seed-saving right into the genetics of the varieties. Bred by Carol Deppe.